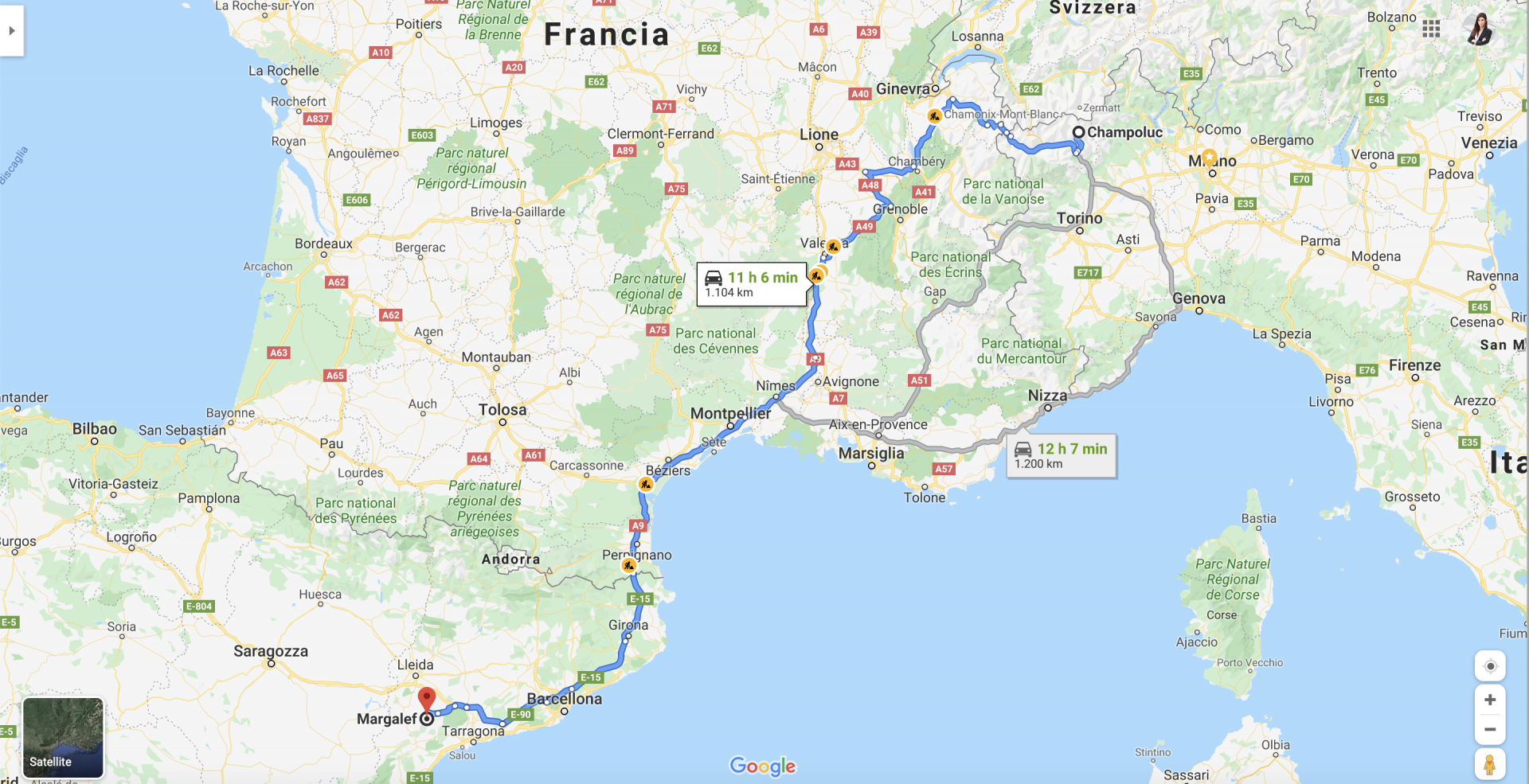 When I first started the blog, the plan was to drive from the mountains (Italian Alps) to Rodellar, a famous Spanish climbing destination.

However, as the date got closer, the weather forecast started looking anything but promising, and we decided to detour to another big Spanish climbing spot – Margalef – instead.

While Fil was still coming down from the UK with the van, my car trip now looked like this:

I wanted to drive on a mixture of non-toll and toll roads, for the simple fact that Italian and French tolls are absurdly expensive and it would have cost me 400 € instead of 150 € to save just a couple of hours.

THE DAY OF DEPARTURE

These sneaky bast#### somehow knew something was up.

Maybe the apartment looked too clean? I don’t know what gave it away – but they knew.

Because I was cleaning and emptying the apartment, I left the door open. They wandered a bit in and out, with a fairly suspicious look on their face.

The car was almost fully loaded. I pulled down the back seats and set up their carrier, made it nice and cozy with several layers of blankets and towels, their cat bed and a portable litter box.

I left the door of the car open and Milù went in to inspect the situation.

As departure time got closer, I decided to put them in their harness. They really dislike it and usually stop walking around or slow down, so I thought it was a smart idea.

As soon as I put the harness on Simba, he knew I was up to something and ran off. He found himself a nice little spot where I couldn’t reach him with my hands, and just sat there, giving me this “WTF?” look.

Luckily, Simba is an easy catch. Just wave a pack of treats or some cat food before his eyes, and he’ll come running.

So I pulled out a pack of treats and called him – it worked. I waited till he finished his “lunch” and then grabbed him, put him in the carrier and then shut the zipper.

Milù, on the other hand, is smarter than that. She’s got this talent – as soon as she knows I need to catch her, she disappears and is nowhere to be seen for hours.

Luckily, I put the TabCat tag on their Seresto collar a week before departure, so I could easily locate her.

A few attempts later, they were both in the carrier and we were ready to leave.

16 hours behind the wheel is a long time.

I planned to take breaks every 3-4 hours, leash walk the cats, stop after 6-7 hour to sleep, and then resume the driving in the morning.

I started driving at around 5 pm. The beginning was a little stressful, because the cats had no idea what was going on and started meowing loudly or panting.

I checked on them regularly through the back mirror. Simba was most distressed, trying to tear apart the walls of the carrier fabric with his teeth and claws. Like, REALLY going at it strong. I thought the fabric was going to give up at any point, but it didn’t and Simba eventually gave up.

Many hours and some meowing later, I still hadn’t found a suitable place to stop. Truth be told, I wasn’t even tired. Maybe, because I embarked on the trip knowing it would be a long one, my brain was prepared for a good push through.

However, as we were crossing some random villages in the middle of France, day turned to night. It was midnight and we all needed a break.

Also, one of the fluffs took a poop and the car started stinking so bad it became unbreathable.

I found a little weird spot with grass and enough room for the car, stopped, and opened the zipper of the carrier just wide enough so I could take the litter box out.

Wow, they actually pooped in the litter box! However, maybe because the car was moving, they reeled one of the towels in while covering it up, and some of it ended up on there.

I had some plastic bag prepared for the inconvenient and wrapped the towel in there, cleaned up the box and refilled it with litter.

The cats seemed to take the trip more or less fine, sleeping through when I was cruising and getting restless (read: trying to tear the carrier apart) whenever I’d stop.

I had to be quick now. I reopened the carrier zipper just enough to put some food and water through, which they ate and drank, and then… tried to leash walk them.

Whatever you have fantasized about the first time you actually leash walk your cats on your trip, it’s 100% going to go wrong.

One cat started walking into one direction, the other cat into the opposite direction, and one leash got stuck behind one my car tyres.

While I managed to untangle it, Simba started pulling really hard and became very nervous because he couldn’t go where he wanted to.

After 10 long minutes, I put them back in the carrier and started driving again.

An hour later, I stopped again in a secluded parking lot off the road and repeated the experiment.

Yep, it went all wrong again.

After what felt like the longest 10 minutes ever, I put them back in the carrier, tried to sleep a bit and they calmed down, too. However, since I couldn’t recline the driver’s seat and the passenger’s seat was full of stuff, it was extraordinarily uncomfortable and only managed to sleep for 1 hour.

I wasn’t even tired and resumed driving, thinking, the sooner I’d arrive, the better for the cats.

We pushed through for another couple of hours, then had to stop again so I could rest for another hour, and then back on the road.

At that point, I got on the motorway. We had 6/7 hours left to drive and I just pushed through, occasionally stopping for a cup of tea or a toilet break.

And then we finally saw the signs: MARGALEF. Only 11 km to go!

Because I didn’t stop at all to sleep, I arrived 7-8 hours earlier than supposed, and Fil was still traveling with the van. Which basically meant we were temporarily homeless ?

There was no way the cats could stay in the carrier / car any longer, so I had to find a solution, and quick.

After a bit of scouting, I picked a secluded, rural road surrounded by nature and parked somewhere in the middle of nowhere.

I let the cats out with their harness and leash on, tried to coordinate their movements, and before I knew it, they were both OUT OF THEIR HARNESS.

They sort of ran off, and at that point were impossible to catch, so I just strolled around like I usually do with them and, surely enough, they immediately stopped walking around and started following me.

They started exploring the area, then chilled under the car, then explored the area again, and just chilled or played with me.

They immediately adapted to their new environment, even if they didn’t have a home yet.

At that point, we just waited for Fil to arrive with the van. I thought they’d freak out at the noise of the big van engine, but they didn’t!

As soon as the van got closer, they just took a good look and quickly got acquainted with it.

And that was it!

It was a bit of a stressful drive for all of us, but everything was forgotten as soon as we settled in the van.

We’ve now been living out of the van for a week and it’s been very interesting! Stay tuned for next post – I’ll let you in on how we’ve set up the van for traveling with the cats, what’s worked and what hasn’t, and how the cats are taking moving ‘home’ every so often.