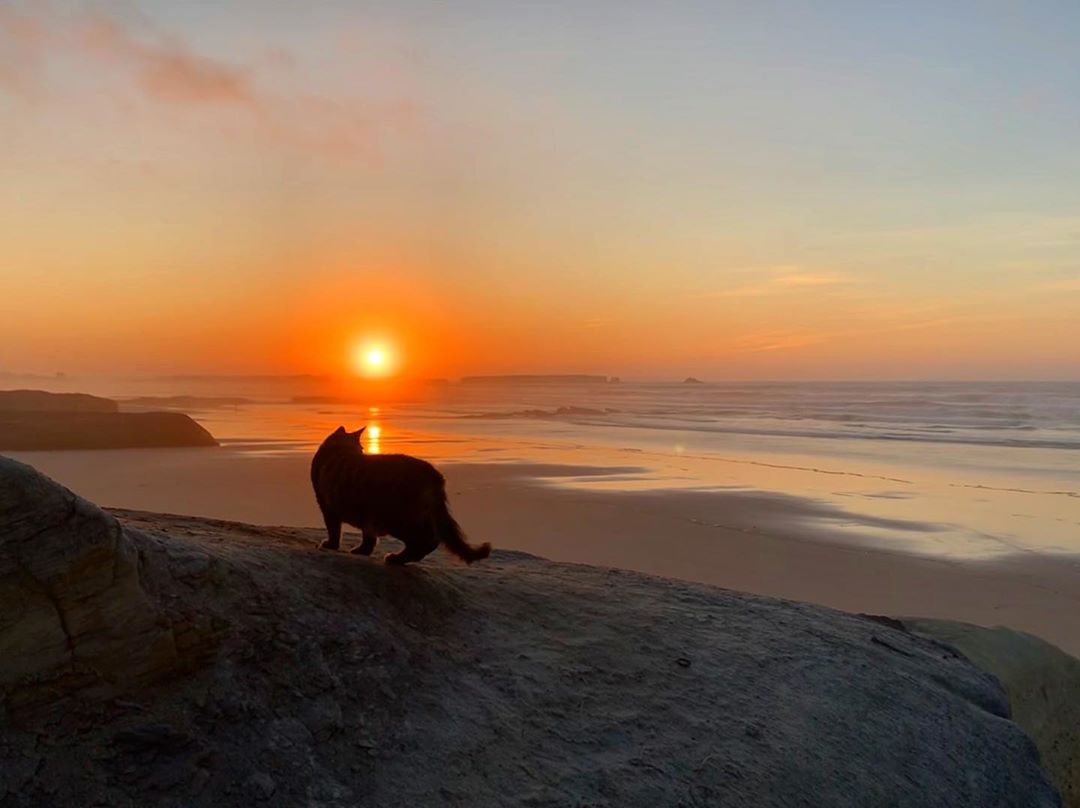 August was slowly coming to an end. I desperately wanted to go back to Terradets, where Milù disappeared, but it was still too hot (40°C) to be there in the van.

As heartbreaking as it was, I had to keep putting all my trust in my aircon-powered local contacts to carry out Milù’s groundwork search for me, and wait for temps to go down.

Meanwhile, Fil needed to meet family in Portugal and sort out important paperwork in Lisbon. We opened Google Maps and typed our next destination.

On the 16th September, we packed up our stuff and made our next move.

Our first stop was Peniche, a cape that sticks out of the Portuguese western coast into the wide, open ocean.

It’s a world-renowned surfing destination. Ever heard of Supertubos?

We picked a remote area carved out of dirt tracks and sand, and parked on a cliff overlooking the ocean with an easy, almost private access to the beach.

This worked out perfectly for us. The parking spot only had enough room for my car and the van. The road led to a dead end, and was therefore always empty.

Whereas this might sound like we got lucky, all credit goes to Fil. He always spends days on Maps and scouts every single square centimetre within a 10-20 km radios prior our departure, to make sure we can settled down at a Simba-suitable location.

Simba had his own little patio to hang out on, with a forest of tall sugar canes to explore and the biggest litter tray a cat can dream of.

Most importantly, it was Simba’s first time by the sea!

Although we did spend a few months by the Italian seaside up until last December (2018), our apartment was located on a hill, a couple of km into the countryside. So Simba never actually saw such an open, vast, endless surface of water.

I wasn’t sure how Simba would react at sight of the ocean. Can you image being 30 cm tall and suddenly facing an infinite horizon of blue mass?

Well… Simba didn’t really give a crap about it. Completely. unimpressed. He scouted the ocean, checked the waves, took a good look at the surfers, and then turned around. OK.

Up and down the sand towers, following the path to and back from the van, he quickly grew confident of the area and even found a nice spot to take a #poopwithaview.

Could it get much better than this?

Once he had declared himself King of the Cape, Simba decided it was time to explore a little further. He started following me around and all the way down to the beach…

He was quite excited, but the beach was a bit too open a space for his taste. He meowed his way into a crack formed by these massive, red sand towers on the opposite side of the path that led to the beach, and then followed me back up the cliff.

We sat and watched the sun set and the last few surfers fighting over a wave in the water. And Simba contemplated the extent of his Catdom.

We developed a thing for sunsets over the ocean. Wouldn’t you?

A couple of weeks later, it was time to move to Lisbon to sort out Fil’s paperwork.

We choose to stay out of the city, about 1 hour from the center, in a remote location between Sesimbra and Setubal.

Our parking spot was once again on a cliff overlooking the ocean. But, this time around we didn’t have access to the beach. In fact, there was no beach.

Following a steep, friable path, the cliff ended in a rocky platform where waves of all shapes and sizes where crashing one after the other, all day and night.

Neither of us dared to walk down there. Simba spent most of the time chilling on the van tower lift with us, watching the sun set over the horizon in awe. (or so we like to think)

We were far from any human settlements, so Simba was free to wander around under our supervision.

All was going well. Then, this happened.

Lost kitty – to the rescue

One evening, we heard growling… Simba was staring at something.

We looked out and, lo and behold, spotted this kitty hanging out in the bushes. He was looking at us and meowing.

We noticed it was wearing a collar. Was he lost!? SOS! RESCUE!

I got hold of a big LED lamp and gathered a bunch of Simba’s food (sorry, Simba). We wanted to snap a photo of his tag, get hold of the number and try to locate the owner.

I shook the treats, laid some wet food on the floor and kitty came running, ate it all up really quick and purred against my leg.

That gave me enough time to take a photo of this tag and read the number on it.

“Hello, is your cat lost? We are in the middle of nowhere and your cat just showed up”. The text I received back left me puzzled:

Luckily, we quickly found out the lost kitty belonged to the man’s brother, and, for some really odd reason, it had his number on the tag.

A few minutes later the man came and picked him up, Simba munched away the rest of the food and everything ended well. (Except Simba didn’t forgive me for using his food as bait, of course)

A few days later, a storm hit us and the winds were so strong, we were almost afraid the van would tip over.

Fil did more scouting and found another idyllic beach with a big parking area and lots of bushes we could move within a short drive.

Huge, empty parking lot on dirt (rather than tarmac or concrete, which we don’t like). Just a few steps from a big, wide beach. Good surf forecast. Bushes for Simba. And really cool beach bars where I could work from, to change it up.

The location was perfect.

Until we found out that, just a few meters from us, there was a nudist beach and some of the bushes – how do I put it without being gross – were a preferred hide-out for people who wanted to ‘explore the dunes’.

After a few men walked in and out of the bushes in front of our van within the first half an hour, both Simba and ourselves were totally EWWW and drove away. ?

We moved a little further and parked right off an old train track, which Simba absolutely loved. He always likes walking up and down paths, and this unused track was a perfect playground for his paws.

Another couple of weeks went by and our month in Portugal was coming to an end.

It was time to return to Terradets. I was equal parts eager to go back and keep first-hand searching Milù, and utterly stressed by the mere thought of it.

The van is big and Fil doesn’t like driving it in the dark, so we picked a spot halfway through to Catalunya and spent one night there.

Simba, as usual, at first wasn’t thrilled about the van moving, but got used to it and spent most of the time up on the bed.

We parked up at an abandoned house with unused land, so I could take him out on a walk to stretch his paws before another long drive the next day. It will never cease to amaze me how quickly and easily he adapts to a new place.

On the second day, we drove and drove and drove until we finally arrived at out destination. Simba already knew and immediately recognised the place, so we settled down and let him out.

And that was it. Out of Portugal and back in Spain.

Stay tuned for our next update – I might finally be ready to tell you all about Terradets and Milù’s story.