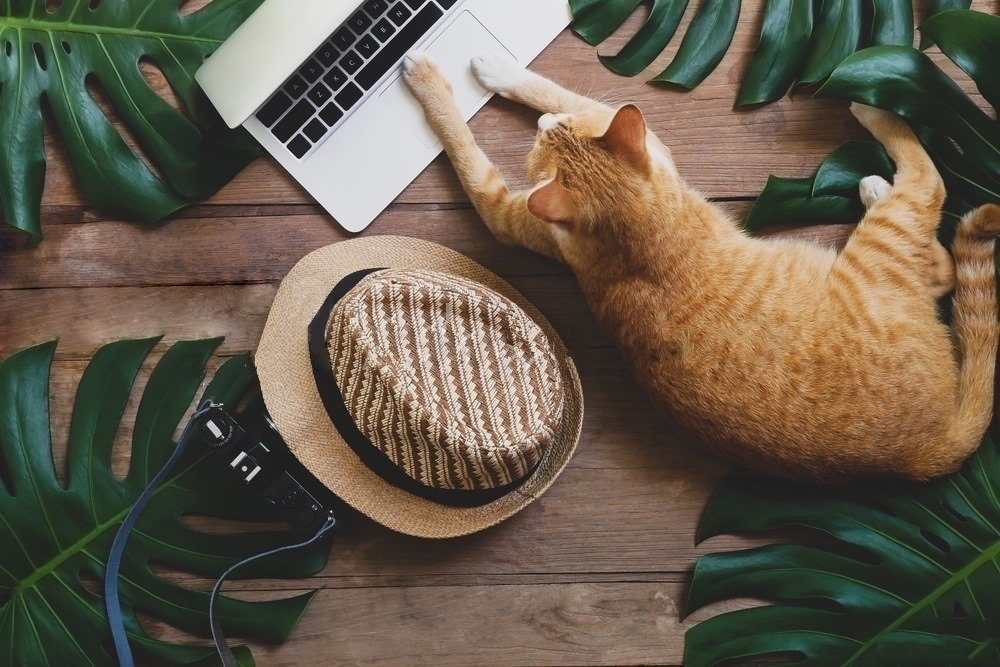 If you Google “Traveling Long Distance With A Cat”, you’ll find plenty of articles along the lines of, “Stressing out about traveling with your cat? Chances is, you cat is too!”, or very practical tips on how to prepare you cat and vehicle for the road.

(Read about how we set up our car for a car trip across Southern Europe here.)

However, if you dig a bit deeper, you’ll find another side of the coin to this story.

There are people who travel long term and long distance with their cats, a whole bunch of them. Some travel by van (like us), others by bike. And their felines all love the journey.

We put together a list of the 10 traveling cats that you need to start following now. Enjoy!

Dean Nicholson began his journey in his hometown Dunbar, Scotland, September 2018 and set out to travel the world on his bike. He cycled from Scotland to England, got on a ferry to the Netherlands, and then crossed through Belgium, France, Switzerland, Italy, all the way to Croatia, before arriving in Bosnia – 3 months in his trip.

Dean was cycling in Bosnia, near the border of Montenegro, when he heard a meow and spotted a kitten chasing him up the hill. And that was it! He tought that Nala – he named the cat after his favorite cartoon, the Lion King – had been ditched a few miles out of town, and decided to take her along his journey.

A vet visit revealed she was only 7 weeks old and unchipped. A few days, a microchip and a few vaccinations later, Nala set out to see the world on Dean’s bike.

Dean is currently in Turkey and plans to make his way to Australia, passing through Georgia and then making up the route as it goes. Next, he wants to fly to Argentina and then bike all the way up Canada.

Rich East quit his job, sold his house and his stuff to travel around Australia with Willow, his rescue adventure cat.

Rich was living the corporate life. However in his own words, he had ‘everything but happiness’. That’s when he decided to leave it all behind and convert a van into his new home.

He left it all behind, but one thing: his black cat, willow. He started by taking her on small trips, and then away on whole weeks. He was shocked to discover that not only did Willow copy with the changes, she actually loved it. What Rich thought was a house cat, turned out to be a van cat!

Rich is now working on his next van conversion, which will have to be big enough for his cat and his Willow-approved wife-to-be.

They also wrote a book about their travels, which you can purchase here.

Theo & bee from TheIndieProjects rescued Ginjeybear from a tree (with the help of firefighters) back in 2016. She wasn’t chipped and no one ever claimed her, so after a while they just took her in.

The humans were living on a boat, so Ginjey didn’t have a ‘normal cat life’ from the start. After that, they moved around the UK and then to Portugal, all while converting their van into their home. They are currently out in Norway and the 2-men-1-cat team is still going strong.

10-year old Marbles went missing from her original home (in Australia); but the owners couldn’t be traced and no one ever claimed her. She spent one year in the shelter, when Ollier decided it was time for a change in the cat’s life.

He took her home – I mean, to his van, and the rest is history. Marbles now loves hanging out in Ollie’s converted van, chill on the beach while Ollie goes for a surf and explore the world one paw at a time.

They recalled how Millie was friendly and wanted attention, which most stray cats don’t. She’d follow them along their hikes and never walked too far.

Before leaving the area, they thought that it would be best to leave Millie in the location she was so familiar with. But 5 hours into the drive, they realized they’d made a mistake and turn around to get the kitty.

Do you know any other epic feline travellers we should follow?

Let us know in the comments! ?