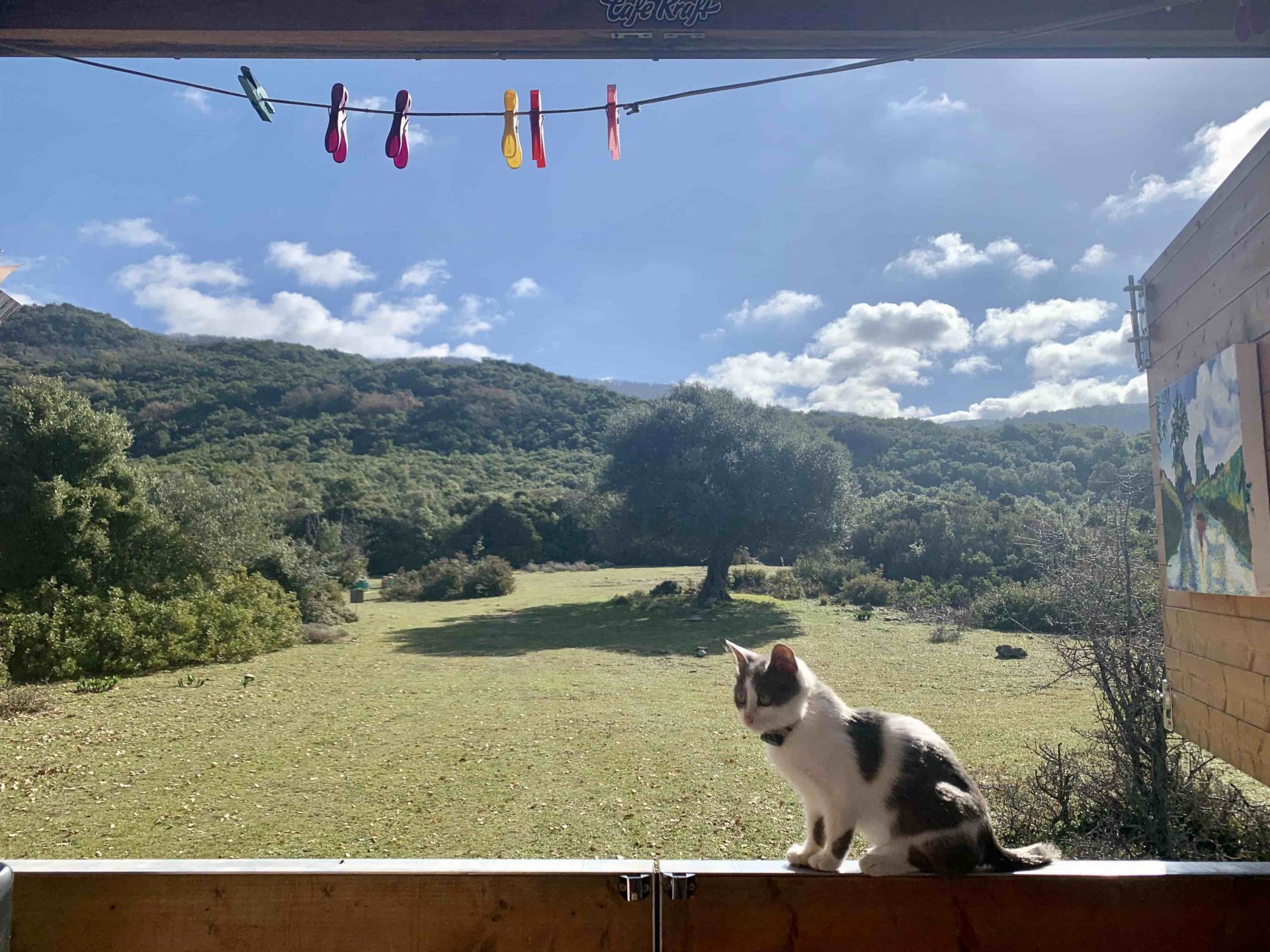 When we set off for our long-term rock climbing trip on the van, we were afraid that Simba was going to be a handful.

He used to walk on our chests at the most ungodly hours, and he would do it on purpose: to be fed or to be let out. And if we didn’t abide, a lot of meowing would ensue.

When I’d found Simba one year earlier, he was an extremely vocal cat. I suppose that was the result of having to fight with other strays for a portion of the food and to be heard, just in general.

Luckily, Fil had the idea of installing a cat flap that we could control remotely and manually in the van. We installed it and our problems vanished overnight. By allowing him to go out (only when it was safe to do so), we didn’t hear one single complaint-meow for months.

Over time, he even modified his desperate feed-me-now meow into a pitiful, manipulatory haven’t-been-fed-in-years meow that’s actually very sweet.

Little did we know that our life – and good night sleep – would have been turned upside down a few months down the line.

If you’ve been hanging out here for a while, you’ll know that we recently rescued a kitten from the streets of Greece. You’re not up date?! Don’t worry, read about it here.

Dobby has now been with us for almost 2 months. Doesn’t sound much at all, right?

When we picked her up, Dobby was this little, weak, dirty thing, and she wouldn’t even move or meow for days after we put her in a custom-made cardboard box with an emergency litter tray and some food.

Fast forward 1,5 months later, she’s exploding with energy. Saying that Dobby is an asteroid this close to destroying the earth is an understatement.

Fil has never had a kitten before, and my kitten experience is somewhat limited. My first cat was only a few months old when he was introduced to my family, but I was only 5 and can’t really remember how mental he might have been.

I also had another kitten when I was 20, but he was more scaredy and cuddly than anything else.

Every other cat I’ve ever had, came to me in adult age. Simba, for example, showed up in my life when he was already 4 years old.

Well, we were definitely not prepared for the wave of destruction that this tiny fur ball was about to hit us with.

Mornings in the van

When we wake up in the morning, there’s only one thing to do: pray.

By the time we get up from bed, there’s been a lot of banging and loud noises.

Usually, it means she’s been running up and down the cat tree, picking up her toys and scattering them all over the place, attacking toilet paper rolls, and kicking her litter in corners we didn’t even know existed with her little legs.

Poor Simba – who used to wake us up in the middle for the night for food or cuddles – has taken to moving as silently as possible not to be detected, and hiding under the duvet with us.

But of course he always fails. Dobby sleeps approximately 3 minutes and a half a day, and the rest of the time she is highly vigilant and ready to jump on anything that moves (or not).

Most mornings, we wake up to a van that looks more or less like this (usually, worse):

If you read our article on Dobby’s rescue story, you’ll know that she really likes being around Simba.

Of course, that also means that she loves playing with him – 24/7.

Simba has never been a super playful cat in a traditional way. He likes following me on hikes and, when we get back closer toward the van, he likes me to chase him and to sprint.

He also briefly enjoys playing with stuff like long grass, a rope, or a gummy ball that we originally bought for Dobby.

But since Dobby has been jumping on his neck any time he moves, he’s become a little more keen to play – even by himself, when she’s not annoying him.

And, if I have to be honest with you, she’s extremely annoying. And he’s extremely patient. I never knew Simba could be THIS patient.

Even if she’s not in the mood for playing, she still stays glued to him 24/7. She either follows him around, sleeps next to him or on him, and tries to steal his food!

The funniest thing is when I wake up – typically earlier than Fil, to put in a few hours of work – and she’s at her most mental.

Actually, we wake up BECAUSE of Dobby. Around 5-7 am, she starts having the zoomies… on the bed. More specifically, around our feet. But I guess that’s an improvement since the times she’d walk over our heads approximately 300 times win half a minute.

We try to throw stuff on the floor to divert her attention, and she usually runs as fast as possible down the cat tree to catch it.

But that only lasts a couple of seconds. She knows, and immediately runs back up on the bed to pick her business up right from where she left it.

Out of exhaustion, we went over a few options that would allow her to use up her kitten energy – but also us to sleep at night.

We tried walking her on the leash during the day or play with to tire her out, feed her right before bed time, or removing her toys from the floors during the night… but everything failed.

Our next idea was crating her. We still have a big car dog crate we used to transport Milù and Simba by car from Italy to Spain, and she would have definitely had more than enough room to play and sleep for a few hours at night.

However, she got a bit better and actually stopped going absolutely mental at 3 am, so we put Plan Crate aside.

Sleep and cleanliness issues aside, Dobby is the perfect van cat.

And we’ve had to do that A LOT, to take her to her frequent vet appointments to cure her from all the things she had as a stray kitten.

Simba, on the other hand, used to go mad whenever we’d switch on the engine. 9 months into the trip, he’s learnt that engine and van moving don’t equal death, and doesn’t try legging it out of the (locked) cat flap any longer.

Dobby never tries to go out of the cat flap (which she can’t anyway, since it works with microchips and she doesn’t have one yet) and is fairly scared of the outdoors, which we’ve found quite surprising.

She was born and grew up around the beach, after all. Probably, not having a mommy and having to fend for herself in winter from such a young age has scarred her.

She either takes a few timid steps on the tower lift or hangs out of the door we leave the back doors open, and has recently started to gaze out of the cat flap (not too interestedly).

However, she’s followed Simba a couple of times out of the cat flap by mistake, so we’ve put a Tile tracker on her collar just in case.

We’ve also taken her for a few leash walks, but she has a long way to go to actually enjoying being outside. Unless Simba is there, in which case Dobby’s confidence skyrockets, too.

What the future holds

We will soon finish up her rounds of vaccinations, spay her, chip her, and get her her Greek European passport.

Follow our travels on our Instagram profile to see Dobby’s journey and mischiefs in real time, and drop your email below to subscribe and get all the information you need about traveling you’re your cats! ??