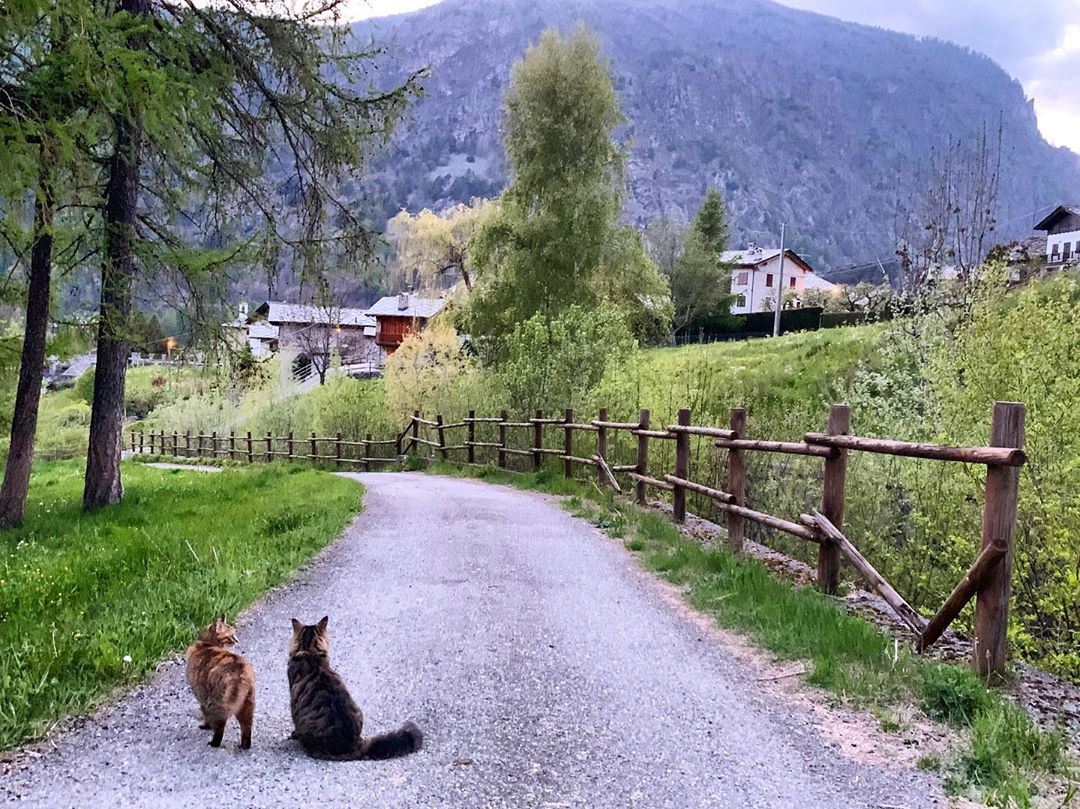 This blog came about to document the life and travels of two rescue cats. But before I do that, I need to give you a little background story about how we got here.

“What greater gift than the love of a cat.”
― Charles Dickens

A Bit of Background

My name is Martina. I am almost 30 – OUCH – and was born and raised in Milan, Italy. I officially moved out of the country when I was 19 for the first time and have lived in more countries I can recall ever since.

Hopping from continent to continent and country to country, I somehow squeezed in a Bachelor’s degree in translation studies and, in between a job at a restaurant in Germany and one as an airline employee in Italy, I started my location independent translation business.

Somewhere down the line I dropped every other gig, officially registered my business, went fully remote and never looked back. It’s been over 8 years since the very first translation project. The once-upon-a-time fledging business has now turned into a full on multilingual marketing translation service that helps mid-sized brands expand to other markets.

At the end of 2015, tragedy struck my family. My grandfather’s health was quickly deteriorating due to a lung cancer, and my dad simultaneously got involved in a car accident that left him paralyzed. I had to fly back.

Unable to cope and with a profound disdain for big cities, I had to almost immediately leave Milan. I moved to a tiny little village by the Italian seaside that was only 1,5 h away from my family‘s home, and would allow me to go back every week.

Summer went by and it was time for a change of scenery, but I still couldn’t move too far away. I moved up the mountains to spend winter in a tiny little village, also only a couple of hours away from my family, and that I was very familiar with as a long time skier.

And then, it happened. Amidst all of the chaos, one morning, Milù appeared at my doorstep in the middle of the Italian Alps.

She started hanging around in the daytime. She’d leave at 8 pm every night and show up again in the morning. I started leaving my door semi-open when I’d wake up so she could push it with her little paw, make her way in to escape the snow and harsh winter conditions. Day after day, she would show up and crawl next to me while I worked from home, one translation project after the other.

I started wondering whose cat it was, because she didn’t look like a stray and was clearly used to being around humans. And she must going somewhere between 8 pm and 8 am. Was I being the lover in the equation!?

But then, she started sticking around at night. One night, I passed out after a climbing session at the gym and didn’t let her out. She didn’t have a tray to pee… and did it in the shower drain rather than on the floor or on the bed. I was amazed. This cat was smart.

I started asking around to find out where she came from, but no one knew. Also, I had no neighbors (unless you count the foxes that stole my trash at night or the wolves that owled from time to time) and running into another person wasn’t that common. (When I said “fully remote”, I actually meant it.)

A couple months later – by which the cat had fully claimed my home as hers, and I had consequentially been spending more money I’d like to admit on cat toys and the like – I finally ran into the man who had all the answers to my questions.

The Kitten From The Woods

The man had just lost her wife and moved to a small house in my tiny village because he couldn’t bear the pain of being in their home alone.

One day, working on a snowed-under hill up the mountain, he ran into a German woman that was there on holiday, and who had just found this little kitty in really poor conditions. The kitten was malnourished and ill, and would have not made it through winter.

She took her to the vet and vaccinated her, but couldn’t keep her, so she left her with the man. The man kept her throughout the winter and helped her get back on her feet – I mean, paws, but would have released her back into the wild once winter had gone by.

But Milù – that was the cat’s name, as I learned – found me first.

She needed to give and to receive so much love, and definitely caught my true crazy-cat-lady essence at a first glance. She knew I couldn’t let her go after I’d find out she had been abandoned in the woods.

However, used to traveling like I always have, I was hesitant. What was I going to do with my life, with a cat? How was I going to be able to just hop on a plane and disappear off the face of Earth whenever I pleased to do so, like I used to?

Well, clearly I couldn’t. It was either the cat or my old life as a ‘digital nomad’.

While I was still mulling over this, one morning, as I drove up to the lifts to spend the morning surfing powder on my snowboard, I quickly stopped by at one of the local food shops to drop some cat food Milù didn’t like. The old lady who ran it was feeding a bunch of strays and I thought she might find it handy.

The second I stepped out of my car, a cat trotted toward me and started rubbing his pretty fur on my legs. He looked different from the other strays, who immediately ran away as soon as they saw me.

And There Was Simba

And then, it happened again. The old lady saw me and immediately said: TAKE HIM. He’s been abandoned, take him.

No way!, I thought to myself, I don’t even know what to do with the other cat I don’t own.

Next thing I knew, the cat was coming home with me.

Simba – I named him like that because he looked like a lion – started yelling desperately and throwing himself against the carrier walls as soon as I put him in it, and I thought to myself, WTF did I just get myself into?

As soon as we got home, he ran into a little wooden shed just up the path behind my home. He didn’t come out for 3 days, but would peek out and let me stroke him. I’d leave food and water for him around the shed and go back to check on him throughout the day.

Winter went by, and it was time to leave the mountains once again. It was time to make a decision about the cats. By then, it was a no brainer. The cat would stay with me.

I picked a really pretty house in the middle of nowhere, close to the seaside again – small but with a massive backyard and green, outdoor space around it, to allow the cats to roam as free as possible.https://www.instagram.com/p/BwWN6svAB04/

We went on loads of hikes together. I also started rock climbing more seriously and, inevitably, started dreaming of traveling long term again. I started fantasizing about the idea of moving around on a tiny house. Instead of flying, we could slow travel by land.

While mulling over this idea, a few months later I met Fil through climbing.

He was on a year-long trip around Europe with a friend, based out of his luxurious self-converted van, on a mission to climb as much rock as they could.

Little did I know that day that the van would then become my base for a while and, further down the line, I’d be slow traveling around with the cats just like I’d been dreaming of.