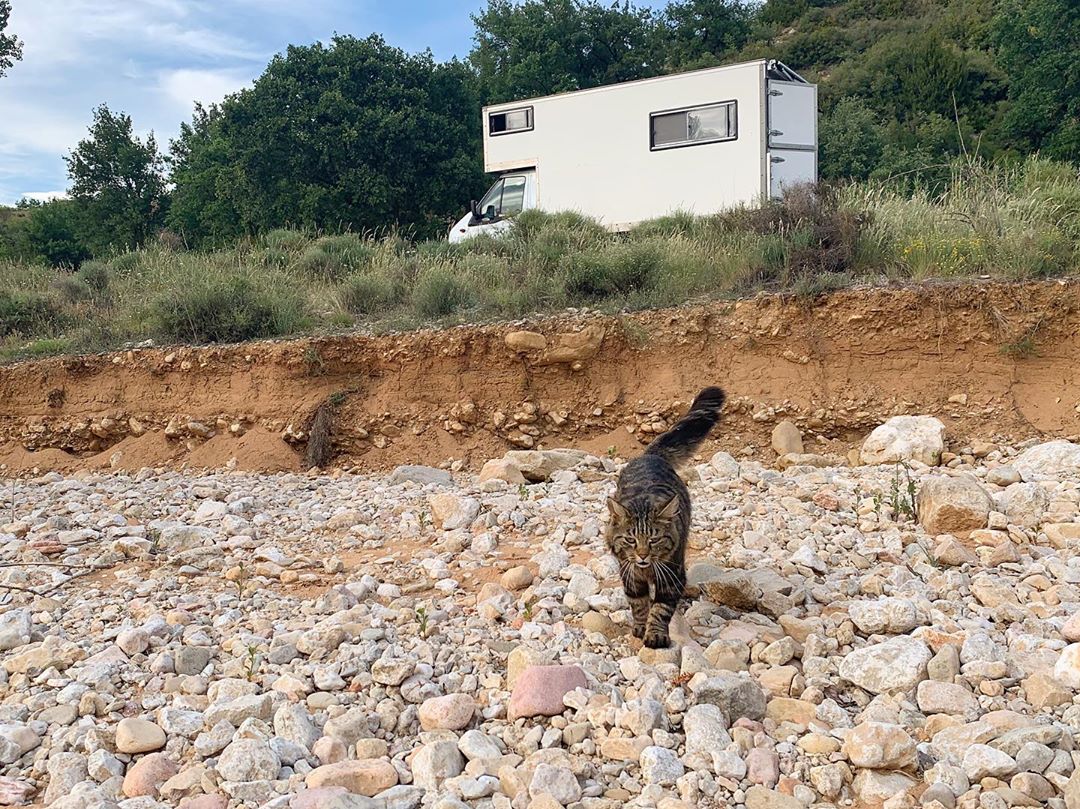 How to live (and travel) in a van with a cat

Living and traveling long term out of a van with my two cats to tour Europe and rock climb was never part of my future plans.

Mainly because I had never planned to have cats in the first place.

But, well, that’s precisely where we’re at.

In fact, we have all been safe and sound in a remote Spanish village in the middle of nowhere for a couple of weeks now.

In spite of all the enthusiasm anticipating the trip, as the departure date got closer, I got more and more stressed about all the things that could go wrong.

Would my cats escape?

What if a car run them over?

Would they feel trapped in the van?

Would they adjust to the movement and constant change of scenery?

If you’ve read my previous posts, you’ll know that both my cats are rescues, very outdoorsy, and usually follow me around like dogs, so I wasn’t afraid they would actually try to escape.

However – and even if they’d already changed homes with me 3 times over the course of 1,5 years – there was no guarantee they would adapt to the new environment(s) and feel at home in the van.

For the sake of context, I need to paint a bit of a picture:

Milù usually doesn’t complain much, if at all. If she wants to go out, she’ll just stand in front of the door or window and give me a couple of looks. If I don’t let her out, she gets over it and just chills.

I was seriously concerned it would be a nightmare to keep him in; that he would keep us awake at night, every night, or just generally be really annoying or become frustrated.

Enter, Fil’s idea: Installing a cat flap in the van.

At first, I thought he was out of his mind. There was no way I’d just allow them to get in and out of the van as they pleased. What if we’re close to a dangerous road or a camping spot full of dogs?!

Well, turns out I wasn’t up to speed with all the high-tech cat flap models out there – and we always visit remote destinations, completely surrounded by nature, where it’s fairly easy to find isolated spots to park and where the cats can roam in safety.

Once I found out we could get an high-tech cat flap and got a grasp of what our parking situation would look like, installing a cat flap in the van started looking like an OK idea.

Basically, you can connect your cat’s microchip with your cat flap, so your cat will be the only one allowed in or out (in case other cats, foxes or other small animals try to sneak in).

Out of all the many models available online, we set our eyes on the Sureflap Connect Microchip Cat Flap, available with a connection hub and app, so I could keep track of their whereabouts remotely.

The SureFlap Microchip Cat Flap Connect with Hub Bundle comes with that cute cat-head-shaped hub and an app that tells you all the things you’ve (n)ever wanted to know about your cats:

How long they’ve spent inside and outside of the house (or van, in this case), how many times they use the cat flap on average, and even when your cat last looked through the cat flap but didn’t go in. And all of this in real time.

You can also lock the cat flap from the inside, or set it up so it’ll automatically lock after they’ve come in so they can’t get out, and the other way around.

You can set up your cats’ profiles and specify all the important details, including whether they’ve got special medical conditions or not.

And, most importantly, you can upload the most ridiculous photo you’ve ever taken of them.

The first time we saw the notifications pop up on our phones, it was hilarious.

“Simba has entered through Fil’s home on wheels… hi Simba!”

But honestly – being away and getting live notifications about your cats’ whereabouts gives you peace of mind.

One day we went out climbing, and realized there hadn’t been any movement for hours, so we quickly went back and checked. Turns out, the WiFi router was off and the cat flap couldn’t connect.

Even if it’s offline, it still opens and locks – but you won’t get any notifications to the app.

For the hub to work, it needs to be connected to the WiFi, which obviously must be on at all times. Also, the hub needs to be wired through a LAN cable.

In the van we do not have any W-LAN wiring, so we got around it by purchasing a client bridge that we keep plugged in the electricity outlets and connected to our mobile WiFi router – which is also constantly plugged in the (solar-powered) van, and set up with a data SIM card.

As you can see, the client bridge has 2 LAN ports we use to connect the hub LAN cable, and it keeps it connected to the WiFi at all times.

The van is big, and that means there’s quite a gap between the ground and the cat flap.

But Fil’s always 10 steps ahead and he actually designed a little ‘balcony’ that we can chill on, and that the cats can use as a platform to get in the cat flap.

Who else has got a really clumsy cat!? Simba has the grace of an elephant, whenever he jumps off the bed onto the floor it’s like a earthquake struck the van, and whenever he walks on or next to something there’s a 99% chance he’ll push it off or break it by mistake. But look at dat face ?

THE DANGERS OF THE OUTDOORS

What happens when they actually get out?

As I said earlier, we only ever let them out when it’s safe to do so.

Do they wander off?

They consider me as their “home” and never really venture too far from the van.

Yes, cats are territorial. But, surprisingly, if you give them a constant – like a vehicle and their human ‘family’ – they recognize it as their home and keep their eye on it.

I’ve also got a leash & harness and a carrier for both of them for emergencies, but as you could read in my previous post, all attempts to leash walk them so far have failed. I’ll have to find a new harness.

Also, I’ve attached a radio frequency TabCat locator to their Seresto anti-tick collar (read all about it here), which allows me to easily locate them when they move around or hide.

I’m currently considering to also get a GPS collar to see where they are in real time for emergency situations.

I’ll update you on this one.

– a “cats loose” sign – it looks and sounds 100% ridiculous, but it’s useful to display around the van in case someone with a dog decides to park next to us or there’s a road nearby and someone comes toward us speeding through. Better safe than sorry.

WHERE DO THEY PEE & POOP?

I’ve been asked this a lot.

Originally, I thought of putting a litter box somewhere in the van, but since we’ve installed the cat flap, they do all their stuff outside and there isn’t a need for one.

No noise at night, no stink, no litter everywhere. Purrfect!

However, I’ve stored one portable litter box and a bunch of litter bags in my car in case of emergency, e.g. we park out somewhere where they can’t go outside. The portable model is perfect because it’s foldable and doesn’t really take up any space when not in use.

WHAT ABOUT FOOD & WATER?

I’ve got a dry food dispenser, which just works wonders. I fill it up once every 2-3 weeks and it does the rest.

For wet food, I just bought a massive amount of cat food before we left Italy and now keep it stored in the van, while one week’s supply is always out for easy access.

I used to have automatic feeders for wet food, but they broke and I couldn’t be bothered to replace them. We’re just using normal bowls for now.

However, if you really want to go all in, I’ve heard great things about the SureFeed Microchip Pet Feeder, which – you guessed it – connects with the hub and super high-tech cat flap you already bought.

Apparently, it stops pets stealing each others’ food thanks to microchip recognition and you can check how many times they eat per day / feed them automatically to get a good routine in in case you move around a lot or your day trip / adventure lasts a litter longer than expected.

No food is safe around Simba.

HOW DO THEY BEHAVE IN THE VAN?

My cats never really caused any major drama, like eating up computer cables or scratching the furniture, and seem to have adapted to the van extremely well.

They also keep themselves entertained by staying outside, occasionally bringing in the poor mice

and I take them on long walks at least once a day.

However, to make them feel as comfy as possible, I’ve set up a little area with their food bowls, a ridiculous cat-shaped scratcher and their cat bed.

Obviously, they still sleep on our bed and scratch the laundry basket instead.

The van is very spacious and they have all the room to walk up and down, jump on to the bed and the kitchen counters, and chill on the sofa – but they spend so much time outside anyway, it wouldn’t be an issue if the van were smaller.

And that’s a wrap!

Do you have any more questions about how we’ve set up the van for 2 cats?

Drop them in the comments below

How we traveled across 3 countries by car with 2 cats