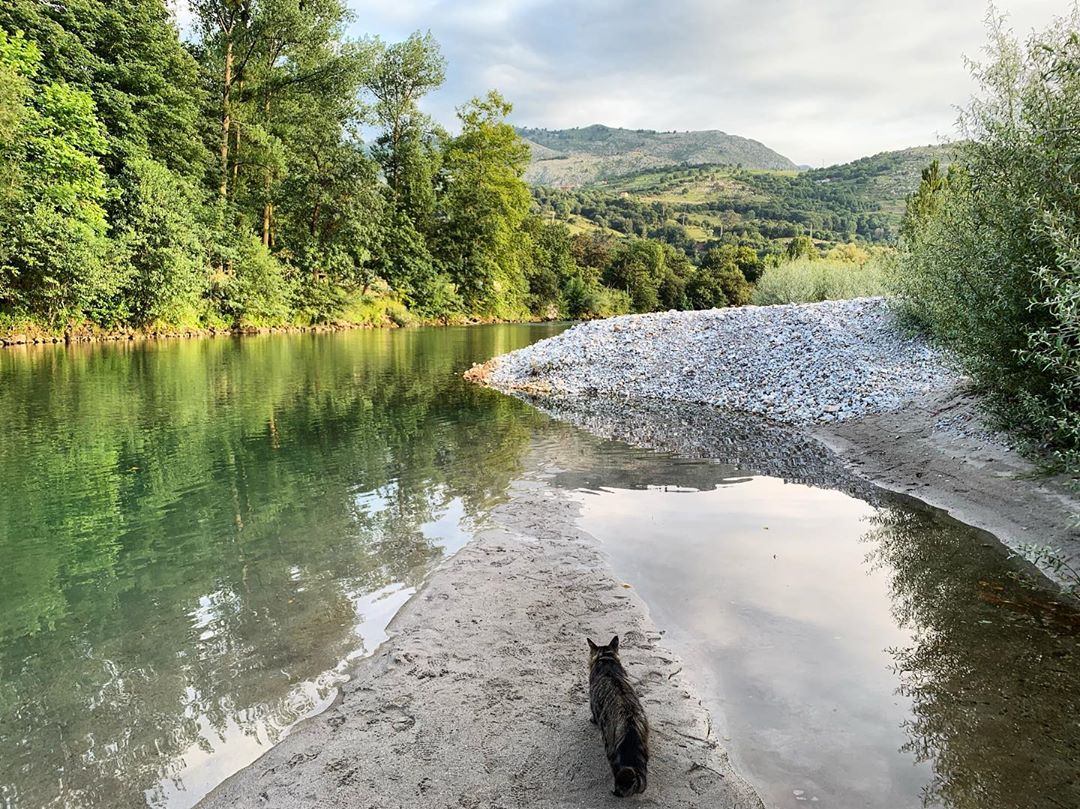 If you read my latest (and first) post, you know my cats and I are about to make a big move: transition to van life. And, in order to do that, we need to drive across several countries first.

Now, I’ve had cats all my life, but traveling with one is a different story. Let alone two.

I’ve taken them both in the car before, on small trips to the vet, and it didn’t go well. While Milù has always been rather delicate, as it is her nature, Simba is usually loud AF and will do everything he can to make you feel guilty. Like smash his head against the carrier wall, and claw whatever he can get his paws on (hint: the gear stick).

Mid May, we’ll be driving all the way down to Spain on what should be a 14-h car trip, but will inevitably turn to many more because we all need to pee, eat and sleep.

Once we get up to Rodellar – a famous Spanish climbing destination – we’ll meet Fil with his van.

The plan is to keep the van in one place for as long as possible, park it somewhere remote and far from roads, and make smaller trips with my car. So the cats have the time and space to get used to their surroundings and have a still place to call home.

In order to get there, and to do so safely for both cats and myself, I’ve been driving myself nuts to find smart and safe solutions for our car trip. Here’s what I’ve found, tested, kept and discarded.

GETTING THE CAT TO LIKE YOUR CAR: THE TRAINING

I’ve tried a few things and tricks, but I must say I’m lucky – both my cats are very outdoorsy (maybe, a tad too much even) and they like exploring things by default.

Every time I come home and they’re outside, which is usually the case if it’s a sunny day, they recognise my car engine from afar and run toward me.

I park and wait a couple of minutes with the windows down, and they inevitably jump up and through the window. Well, Milù does. Simba is too clumsy and the one time he’s tried to, he’s smashed his face against the window.

I tried taking them on a drive around the block out of their carriers and they were much happier and more relaxed (sort of). They’re so relaxed about the car, they hang out with me in the boot sometimes. Disclaimer: I generally don’t have the habit of hanging out in my car boot, but tried to lure the cats in and so it happened.

If you’re not as lucky as myself, you might want to take your cats on multiple short trips around your neighbourhoodto get them used to the movement of the car and reward them with treats each time, so they associate the car with a pleasurable moment.

Another thing you could do, next to placing their blanket or towels in the car – use the Feliway spray. I’ve seen it in action at my dad’s place with his two new kitties – what this spray does it, it releases a chemical that cats emit through the glands on their faces when they are feeling calm. It’s supposed to help them feel peaceful, so it could be worth a shot.

There’s no way in the universe I’m sticking the cats in their small carriers for 20+ hours. First, I don’t’ want to atrophy their arts. Second, I dare you to spend that much time with 2 beasts yelling at the top of their lungs, demanding to be let out.

The first idea that crossed my mind was to separate the front seats from the back to let them roam around comfortably, attached to the seat through a leash for safety purposes.

My car is a Hyundai i30, which means there is enough room to stick some
bags in the trunk and make space for the cats to roam in the back seats.

However, considering I’m literally taking everything I own across a few countries by car – including all my snowboarding, rock climbing, bouldering and remote office equipment plus cat stuff –, I’ll strive to keeping the car as empty as possible and use www.sendmybag.com to ship suitcases and clothes to my destination.

Obviously, I can’t allow the cats to get through to the drivers’ seats. The last thing I need or want is for us to cause an accident because fluff decided s/he should explore the area around the pedals.

I made a first attempt with a net from the hardware store, but It wasn’t sturdy enough and one of them could easily climb up and jump through.

Next, I paid a visit to a pet store and explored all – I mean, ALL – of the options with the poor shop assistant who, after spending the morning assembling stuff in and out of my car, probably hates me and his job now.

WHEN WE HAVE TO STOP OVER

At some point, we will need to stop to pee, sleep and eat. For that purpose, I’ve started (and mildly failed at) leash training them. I’ll give you more details on this once I’ve managed to get some tangible results. At this stage, they (read: Simba) only seem interested in the treats. Meanwhile, here’s what I’ve learnt so far.

Trust me, I’ve tried everything on the market. My honest opinion: Puppia products are the best of the best.
For some reason, cat harnesses generally suck. Big time. Maybe, your cat will love the T harness, but Milù finds it annoying and I don’t like it either.

I thought a harness like Puppia’s ones would be too bulky, but it turns out they’re perfect. Soft tissue, comfy, and sleek, too. Simba loves it. Well, not really, but he doesn’t hate it either. It’s adjustable and easy to make them wear it.As for the leash, I prefer retractable models like this one. It just makes me feel safer and I like being able to give them more leash to explore a little further if possible.

IMPORTANT UPDATE: check this post for an updated review on leash and harnesses.

I read a lot of people suggesting you should sort of starve you cats prior to embarking on a car trip with them, to prevent them from throwing up and peeing / pooping around.

While I’m no expert (yet!), I also know that Simba would probably chop my head off and eat it with pleasure if I ever tried to starve him.

For that reason, I plan on taking small food / water breaks throughout the trip and to leave a portable cat litter tray in the big carrier, so they can use it as they please.

Simba once took a pee in his small carrier and let me tell you, that’s one experience I’m not looking forward to repeating.

As for food, I have also bought (and used in several occasions) portable spill-proof bowls. They’re pretty cool indeed.

In the next blog post, I’ll tackle GPS tracking, tick-and-other-nasty-things prevention and general safety in the outdoors. See you then!

How we set up to travel long distance with cats #2 – GPS tracking, tick prevention & vaccinations