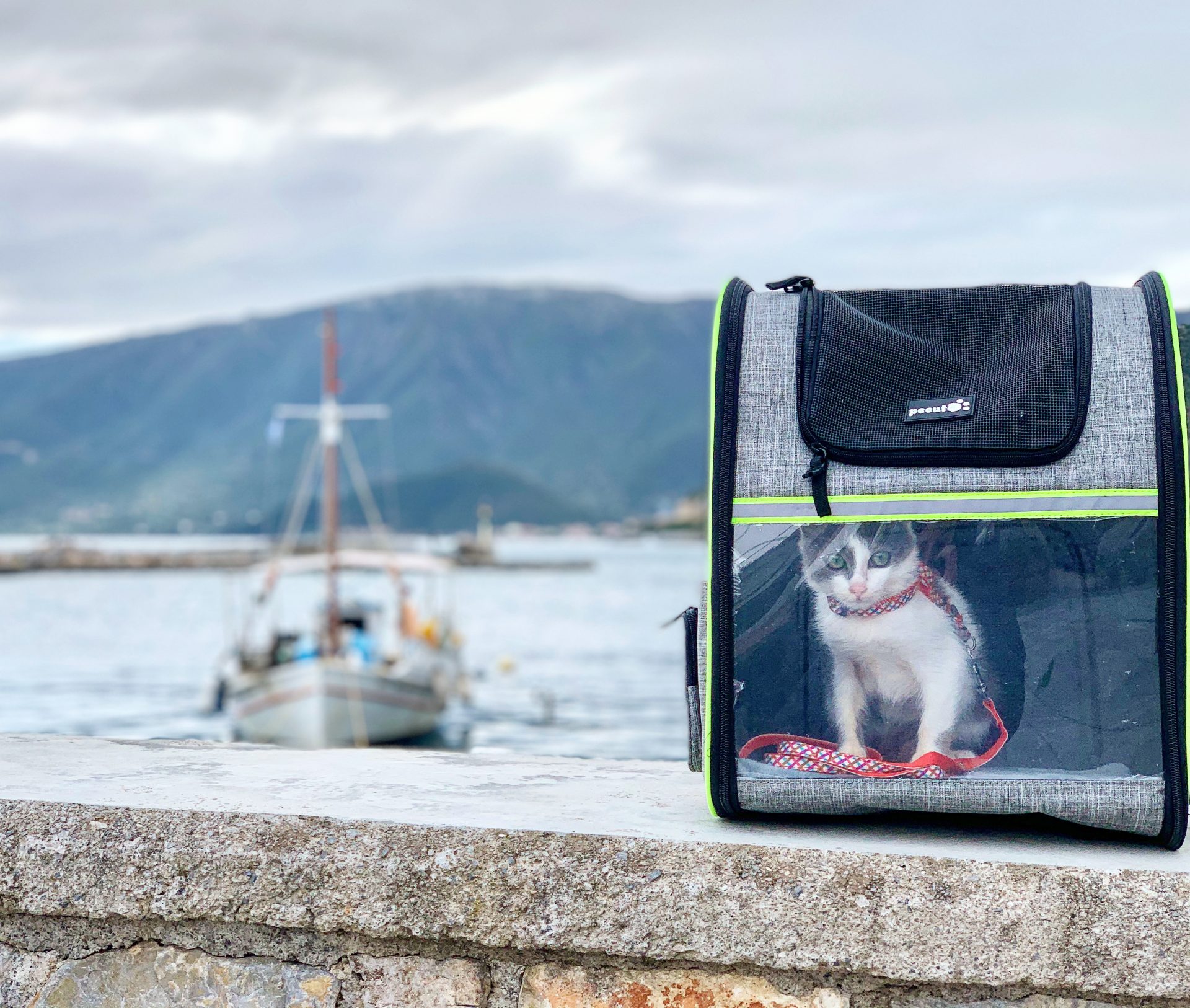 Meet Dobby: How We Rescued A Kitten In Our Van

It’s the 9th of December 2019 and we’re strolling around Leonidio, a small village popular with rock climbers in South-Western Greece.

At this point, Fil, Simba and I have set off from Portugal, traveled across Spain and Italy, and landed in Greece about a month and a half earlier.

After a quick stop at every climber’s go-to bar in town, we jump in the car and drive back to our van, parked in Plaka, a small port just a couple of miles from Leonidio, where most van lifer-climbers like to stay.

On the way back, we drive through a couple of shops and restaurants by the port, home to a massive colony of strays. We decide to stop and feed them with some of the dry food Simba is well-fed enough to snob ? and that we happen to carry around in the car.

Before we know it, we are assaulted by so many cats it’s impossible to even take a step into any direction.

A few tiny kittens, probably a few weeks to a couple months old, are trying to make their way among the bigger tomcats, who are bullying everyone else and snatching up all the food.

We count them: 23. A bunch of them seem fairly well fed, but all of them are dirty – from jumping into the trash bins, scraping around for food – and many bear the signs of fight, distress, malnutrition, and disease.

At least 4 or 5 are extremely friendly, as if they have already had contact with humans before and, maybe, they’ve been abandoned (we’ve heard stories from the locals); all the other ones run away as soon as we take a step toward them.

Amidst all the chaos, we notice a small cat resting with its back against a wall, barely moving. It looks extremely thin, dirty and malnourished. It doesn’t even try to grab the food we are repeatedly laying out in front of her little face.

We crush a bunch of kibbles and leave them right in front of its scabby nose and lifeless eyes, but the kitten still won’t move.

After the dry food is all gone, Fil and I get in the car and make our way back to the van.

But we can’t stop thinking about the kitten.

The nights are getting much colder, and the freezing winds are picking up. The kitten doesn’t look like it’s going to make it for much longer.

We think it over and over, and decide that we should take the kitten to the vet. But the kitten is in such a bad state that it’s likely to hide away for the rest of the night and the day after. And good luck finding it again – that is, if it survives!

It isn’t long before we make our minds up: we want to get it off the streets, give it some shelter for the night and take it to the vet the next day. Our plan is to cure it and, hopefully, find it a home.

We pick up some of Simba’s wet food – which he probably still hasn’t forgiven us for – grab his plastic carrier and set out to look for the kitten. We could easily walk to the port, but we would run the risk of having 23 stray cats following us back to the van. So we jump in the car instead. The kitten is exactly in the same spot where we left it.

This time, it tries to eat some of the food we put down, but the bigger cats are much faster and the poor thing doesn’t stand a chance.

I put on a pair of gloves and pick it up – A closer looks reveals that it is a she.

I’m in shock! I’ve never seen a cat that bony and with such a swollen, hard stomach before. She is so weak that she doesn’t even try to escape from my grip. Zero, she just doesn’t move.

We put her in the cage and take her back to the van. Not one meow, no complaints or other noises for the whole ride. She just stares at us with a puzzled look.

Now, we face our first real challenge: we can’t let her roam freely or let her get in contact with Simba. We don’t know if she has any contagious diseases and, frankly, she doesn’t look very well. In the relatively small space of our van, this is no easy task.

We decide to keep her inside the carrier overnight.

Fil creates a little litter tray from paper boxes we find in the recycling bin, and fills them with sand from the beach. We put a few towels in the carrier and then cover the sides with a tea towel, to help her feel safer and prevent Simba from getting nosy. Incredibly, she doesn’t meow once throughout the night, instinctively knows how to use the litter tray and… purrs. A lot. Very loud.

In the morning, I dry bath her with a cat antifungal / antibacterial shampoo (we already had in the van thanks to Simba’s covered-in-poop misadventures) and take her to the vet.

Her belly is so swollen because of the massive amount of worms that have been growing in her stomach. She has 0 fat on her body, is extremely malnourished, and her bones are sticking out. Her fur is all dirty and stinky. Her eyes drip a black discharge, and the nose is full of black snot, dirt and scabs. Her mouth is covered in yellow mucus and ears are all black inside – not from dirt, but from parasites. And she shakes from the cold.

We treat her for ear mites and internal parasites, and give her antibiotics for cat flu and other nasty things. According to the vet, she should be about 2 months old.

Back at the van, we decide to give her shelter while we treat her and bring her back to health, and then find her a new home. Our friends name her Dobby, and we go by that name.

Now, we have to get creative and find a way to contain her. We have no idea what Dobby might be sick with, and definitely don’t want to risk Simba catching it.

Fil finds a big cardboard box and builds a little home for Dobby. We place her in her new box with a towel, food, water and a litter tray – all made with things we could find in the recycling bins. For the first few days, she is still so weak that she barely moves.

But then she starts getting better – and, inevitably, restless. Armed with another big cardboard box from the paper bin, Fil expands her little home and makes her a condo, with a tunnel and toys to entertain herself with.

Simba starts smelling a rat. When he hears weird noises coming from the boxes, he takes a little peak from the kitchen counter and then runs out of the cat flap, annoyed by this new, mysterious, odd presence more than anything else. After all, he’s been the King of the Castle for quite a while, now.

But it’s just a matter of days: much to our surprise, a couple of hisses and puzzled looks later, Simba isn’t really phased by this tiny being sharing his space anymore.

Dobby, on the other hand, seems incredibly fascinated with Simba. She never meows… unless he meows! Any time she sees him, she follows him with her tiny, curious eyes. And then one day, as she gains strength and confidence… she jumps out of the box.

A week after her first vet appointment, we take her back for her second round of ear mite injections and local treatments and deworming procedures.

Costs start quickly piling up and, encouraged by a few friends, we start a donation campaign to help us save Dobby – and one to help us medically treat and spay/neuter the other strays of Plaka. Donations immediately start coming in: our friends, family and colleagues help us raise over 800 € in just 24 hours! ❣️

The funds for Dobby allow us to immediately cover for several months of ongoing deworming and ear mites treatment, antibiotics, vaccinations, and to get her blood tested for feline leukaemia, FIP, and 3 other potentially fatal and transmittable diseases (all negative!).

And, most importantly, allow for this incredible transformation to happen. This is Dobby after less than 2 weeks with us:

Simba occasionally gets annoyed, but he seems to like the extra attention. Dobby is his shadow: wherever he goes, she follows. And he is extremely patient with her – as patient as you can be with a tiny, mad, restless kitten who wants to play 24/7.

You probably won’t be surprised to read this – but our plans to find a home for Dobby quickly went out of the window and she officially became a foster fail. After all, Lord Simba has spoken: he tolerates the presence and company of the tiny kitten. How could we separate them?

Since the 9th of December – exactly 5 weeks today – Dobby has become part of our home and family on wheels. The cardboard boxes have gone, and have been replaced by a cat tree. Simba is much more playful now that Dobby is around, too. And we’ve caught them working in a team, trying to nib the cat food from where we store it and then giving us their most innocent look. ?

Dobby still needs ongoing treatment for her belly worms, eat mites, ringworms, and other vaccinations, but she’s much healthier and happier now. She doesn’t really like the outdoors, unless she glue herself to Simba and follow him around. Probably, because of her previous experience out in the streets.

But she’s super brave and curious: whenever we take her for a ride or around on the leash and in her little backpack, she never meows (unlike Simba!) and loves to watch the world go by.

*We will use some of her donation money to also help the other strays of Leonidio – updates coming soon!

The Ultimate Guide to Understanding and Training Your Cat With Psychology